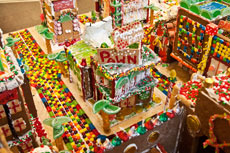 More than 100 architects, engineers, builders and others gathered this week to build the sweetest downtown in America—Gingertown, a whimsical urban show piece constructed from gingerbread, licorice , Air Heads, gumdrops, and icing. Gingertown is an annual celebration of the creativity, generosity, and civic spirit of the Washington-area design, building, and real estate community.  The confectionary town will be on display until Friday, December 2 after which, it will be disassembled and individual buildings donated to area charities along with cash contributions.  Similar Gingertown events are also being held this week in Nashville and Dallas.

Now in its sixth year, Gingertown is the invention of David M. Schwarz Architects (DMSAS).  Each year the firm creates a unique master plan for this holiday themed, magical town.  If at human scale, Gingertown would be the size of downtown Gettysburg.  More than 45 individual structures were built by teams of two to ten members and for some, it was a family affair.   The teams constructed  civic and retail buildings including a replica of a The Smith Center, a new concert designed by David M. Schwarz Architects that opens in March 2012, a city hall, , a jail, a bakery, a golf course  and in homage to Las Vegas several casinos, a wedding chapel and a pawn shop. All building materials are donated by David M. Schwarz Architects.

“Gingertown embodies the true spirit of the holidays—it’s fun, it’s magical, it brings people together, and it provides cheer and comfort to those in need,” said Craig Williams, principal of David M Schwarz Architects and honorary chairman of the Gingertown City Council, assisted by mascot Gingy (a gingerbread man in charge of operations).

Gingertown’s lots allowed individual designers and teams to be highly creative as they built essential town structures trimmed with chocolate, frosting, sprinkles, jelly beans, and other edible (and sugary) building materials. More than 250 pounds of gingerbread, 100 pounds of icing, and ten pounds of gumdrops were used to create this sweet downtown.

The charities receiving the hand-crafted structures include St. Elizabeth’s Hospital, So Others Might Eat (SOME), Wendt Center for Loss and Healing, My Sister’s Place, Children’s National Medical Center, the Washington Home and Community Hospices, and Martha’s Table.  All sponsorships and other monies raised by Gingertown are donated to the recipients of the structures.

David M Schwarz Architects (DMSAS) is a design-oriented architecture firm that sees architecture as both an art and a service.  Founded in 1976, the Washington, D.C.-based firm is known for master planning and creating beautifully crafted buildings that respect their context, perform well economically and are places that people enjoy.  DMSAS  has designed notable projects nationwide including the Schermerhorn Symphony Center in Nashville; American Airlines Center in Dallas; Texas Rangers Stadium in Arlington, TX, the Yale Class of ‘ 54 Environmental Science Center and the Orioles’ Spring Training Facility at Ed Smith Stadium. Find more information at www.dmsas.com.