Rockville, MD ˗ Grunley Construction Company, Inc. , a general contractor with a depth of experience delivering complex construction projects, has increased its presence in the higher education market with the addition
of two new buildings at American University (AU). The firm will provide construction management services for the 122,000 square foot “North Hall” and construct the 53,400 square foot “Nebraska Hall Addition.”

These new residences will significantly expand AU’s inventory of student housing options with 358 suite-style beds at North Hall and 152 apartment-style beds at Nebraska Hall. Both projects were designed by Little Diversified Architectural Consulting and will seek LEED® NC 2.0 Gold certification.

“North Hall” is an L-shaped plan with an eight-story wing and a seven-story wing using post tensioned concrete slabs. It is located adjacent to the President’s Office Building. A precast and glass curtain wall will wrap the building facade. The project is valued at $27.6 million.

The “Nebraska Hall Addition” will be a mirror image of the existing Nebraska Hall residence. It will be a four-story concrete structure with three floors of pre-tensioned hollow core plank slabs. The building envelope will be clad in brick and precast concrete. The contract is valued at $11.8 million. 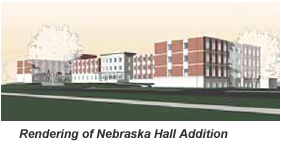 Both projects are scheduled for completion in the summer of 2013.

Grunley Construction is ranked by Engineering News Record among the "Top Green Contractors" and “Top 400 Contractors” in the United States.