1972-1973 WBC Past Chairman Frank Reaves passed away peacefully on Saturday evening, May 13, 2017 at Suburban Hospital in Bethesda, MD. 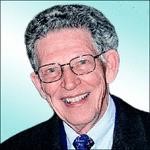 His family was grateful to be at his side over the last few days. Frank was born on May 2, 1924 in Richmond, VA, the son of Harry Lucius Reaves and Lillian Muncaster. He grew up in Martinsburg, WV and maintained many friendships there. He attended West Virginia University, the University of Louisville, Georgetown and American University. He was an engineer, a contractor, a business owner, an inventor and innovator, a veteran of the Navy V12 in WWII, a student of international law, and an incredibly thoughtful and generous family man and friend.

He was a supporter of many charities, churches, communities, and associations, including St. Luke's Church, Kiwanis, Rotary, and Central Union Mission. As the president of R.M. Thornton, Inc. for 29 years and chairman for 25 years, he helped build post-war Washington, DC and contributed to many landmark construction projects, from the Capital Reflecting Pool to the Metro, Washington National Cathedral, the National Gallery and National Institutes of Health. He was past President of the Washington Building Congress and the Mechanical Contractors Association of D.C. Frank cared deeply about the world and its people, with a particular focus on the environment, poverty, and international peace. It's impossible to count how many individual people he helped as well. He never passed someone asking for money without giving something; he never heard someone talk about their dream without offering his support in pursuing it. People who met Frank trusted him immediately, and he was always worthy of that trust. He believed in honesty, fairness, hard work and generosity, and taught those values to everyone around him by demonstrating them every day. Frank is survived by his beloved wife of 69 years, Jane Slater Reaves; daughter Jean (Paul); son, John (Cheryl); son, Robert (Rita); grandchildren, Nicholas, Emma, Julia and Amy; numerous step-grandchildren; and nieces and nephews, Wednesday, Frank, Lee, Ann, Vicky, John Paul, Matt, Nanci and Alan.

There will be a visitation from 10 to 11 a.m., and a service from 11 a.m., to 12 p.m., on Friday, May 19 at St. Luke's Church in Bethesda, MD, with reception following. In lieu of flowers, donations may be made to Central Union Mission (missiondc.org) or Unicef (unicefusa.org).