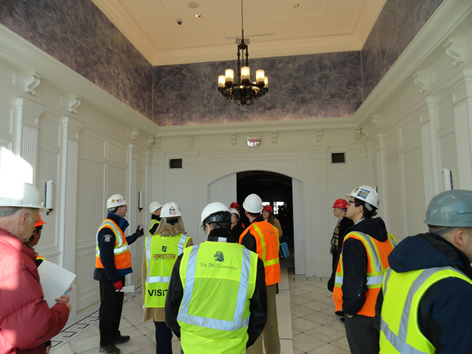 The Woodley, 2700 Woodley Road NW, is not just the first new residential development in recent years to be built in the Woodley Park community, but one where appearances count, being situated on the highest ground of developable real estate in the District and with neighbors with aesthetic sensitivities.  Thus, in 2005, JBG purchased  the hotel and the 16 acre site with the intention of reconfiguring the Hotel to accommodate a new residential tower.  That was certainly a challenge for JBG and its investment partner CIM Group out of Los Angeles. They would have to create a project that would be in line with the high-end residential market, as well as the Woodley Park community, while keeping a very busy hotel open and fully functional during all of the construction phases.   No small task!

To make room for the Woodley residential tower, the Cotillion ballroom and garage had to be demolished.   In order to raze these structures, a new underground parking garage was built in the front yard of the Marriott hotel and a new junior ballroom was created in the open air courtyard in the middle of the hotel by Whiting-Turner Contracting. These projects couldn’t start without creating a new loading dock and moving a few other hotel operations around.  All this work was done between 2005 and 2007.   While this work was progressing, the Woodley was going through several design iterations. 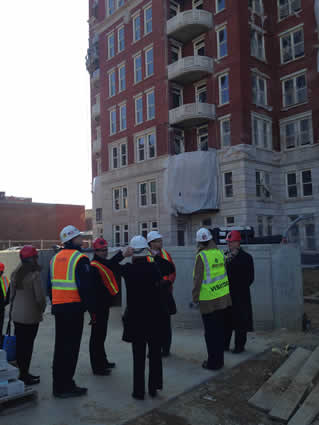 In 2007, with the recession starting, JBG placed the already entitled modernistic design for a 120-unit condo project on hold.   Then, with the benefit of a thorough marketing study, JBG engaged David M. Schwarz Architects, along with VOA of Chicago (design architect for unit interiors) and Cooper Carry (architect of record), for a redesign that echoes the historic Wardman Park Hotel and the grand apartment buildings on nearby Connecticut Avenue.  The current project, which started in June 2011, follows the original planned floor area ratio, but with an expanded number of units.  The Woodley is now a 212-luxury apartment, 8 story mid-rise building with 272 below surface parking spaces.  The exterior is principally red brick and limestone.  The high-end demographic market dictated abundant amenities and a high level of detail and finish throughout.  Individual units are large, up to 4,400 square feet, with high ceilings, generally 9’ 3’ but 10’6”, for first floor units. The high level of amenity and detail is also prominent in the first floor entrance lobby and common areas, featuring marble floors, custom millwork and custom ornamental lighting.  Units have open plan kitchens and living rooms. Most units also have walk-out balconies or terraces carefully integrated into the exterior architecture in ways that enhance the exterior design and capitalize on the building’s articulate massing and detailing. Amenities include 24/7 concierge service, outdoor pool, fitness center, indoor common areas, a lounge with catering kitchen, a library and a rooftop landscaped terrace.

JBG contracted with Clark Construction for the new residential tower and two previous phases of construction.  The first phase of construction was for early start work that included a new vehicular tunnel to carry hotel traffic to the Park Tower garage that was completed in 2011. The second phase of construction was demolition of the existing garage and ballroom, supportive excavation, and excavation of the residential tower garage. The current phase of construction commenced in May of 2012 with footing excavation and continues through residential tower completion this March.  The building is a cast-in-place concrete structure with post-tensioned slabs above grade. The façade consists of brick masonry, cast stone, and Indiana limestone. Clarks management staff of ten supervised up to 250 tradesmen on site daily and included such notable subcontractors as   Clark Concrete - structural concrete; Lorton Stone - limestone façade and lobby stone flooring;  Manganaro - masonry and drywall;  Christman - lobby millwork and unit trim;  Madison - mechanical and plumbing;  Bausum & Duckett – electrical;  Engineered Construction Products – windows;  Otis – elevators;  General Woodworking - rough carpentry;  Gordon - roofing and waterproofing.

The Regional Development Committee would like to thank the Clark Construction staff for leading us on the tour as well as other team members that were present from JBG, David M. Schwartz Architects and Faithful & Gould.