The National Capital Region building industry came together on June 3rd to personally recognize the area’s outstanding craftsmen during the 66th annual WBC Craftsmanship Awards banquet. More than 14,000 men and women have been individually honored over the past 66 years for their work on 3,500+ Craftsmanship Award winning entries. 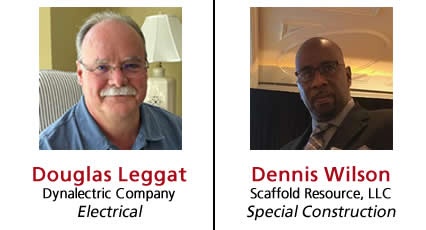 This year 198 nominations were received in ten trade categories from sitework to finishes. Each entry was evaluated in March by a team made up of individuals with a wide range of industry experience. The judges represented a broad cross-section of the construction industry, including architects, interior designers, general contractors, subcontractors, construction consultants, and engineers. All evaluations were compiled, results tallied, and 62 winning entries were identified based upon the judge’s scoring.

Following selection of the award winners, a separate group of Star Awards judges representing different industry perspectives and disciplines evaluated the Star nominees. Star Award winning craftsmen encompass the key characteristics of all Craftsmanship Award winners and exhibit the highest level of focus on excellence. This year, nine remarkable entries were selected as Star Award nominees for demonstrating the highest level of quality and exceeding the awards criteria. From these, the Star Award winners for Visual Excellence, Technical Excellence and Excellence in the Face of Adversity were selected.

The Star Award for Excellence in the Face of Adversity was presented to Carlos Amaya, Francisco Pineda Calix, Edgar Carreto-Ramos, Hector Lopez Perez, Jacinto Torres and Jose Varella with Boatman and Magnani for Ceramic Tile and Terrazzo at National Air and Space Museum Revitalization project.

Finally, the Star Award for Visual Excellence was presented to David Holt with Wilkie-Sanderson for Architectrual Millwork at the Capital One Block C Performing Arts Center project.

Event pictures and videos are now available online.  Click here for the pictures.