Washington DC - On April 8, the WBC Regional Development Committee returned to the soon-to-open Marriott Marquis Washington, DC.  Two years after the first WBC construction site tour of this project, Project Superintendent Brian Fish and Project Engineer Brian Shipper, both with the general contractor Hensel Phelps Construction Company, provided a pre-opening tour.  Before getting into construction details, this unique project merits an overview as to its history, scale and importance. 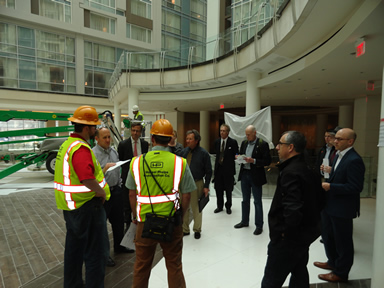 The 1,175 room, 4-star Marriott Marquis, designed by architectural firms of Cooper Carry and TVS Design, is located at 901 Massachusetts Avenue, NW.  It will be the Washington, DC Convention Center Hotel.   The concept for this Convention Center hotel originated more than two decades ago, long before the joining Walter E. Washington Convention Center opened in 2003.   Nothing about this project was straight forward, not its precise location, nor its size, its financing, its ownership structure, its development team, and, yes, its construction techniques.  With its two dozen D.C. Council votes and several lawsuits, the D.C. Convention Center Hotel has been likened to a “recurring nightmare.”   But all that is in the past.  What the Regional Development Committee toured is a dream come true.  From its glass and steel exterior that is integrated with a 1916 historic brick and limestone building, to its interior with a grand atrium punctuated with a spectacular 5-story high stainless steel sculpture titled “Birth of the American Flag”, with its 105,000 sf of meeting space, including three ballrooms the largest of which is 30,000 sf, with its five restaurants and its direct underground concourse to the Convention Center, the Marriott Marquis promises to help bring D.C. to the forefront of the convention market.  The project cost $520 million, entailed up to 1,600 construction jobs and provides for 600 long term hotel jobs.

Construction began in 2010.  Due to D.C. height restrictions, the Marriott Marquis tunneled down 90 ft, nearly as deep as its 16-story height.  That depth, along with the tight construction site and project schedule, brought about the first “top-down” construction project in the Washington D.C. region.  Top-down construction builds the permanent structure members of the basement along with the excavation from the top to the bottom.  The basement floors are constructed as the excavation progresses. The top-down construction method is promoted as saving significant time and money.  Construction begins with the installation of retaining walls and then load-bearing elements that will carry the future super-structure. The basement steel beam columns are constructed before any excavation takes place and the rest of the load bearing elements. These load bearing elements are typically concrete barrettes constructed under slurry walls. Typically, construction proceeds as follows: construction of the retaining wall, placement of steel columns, and excavation to the first stage, and casting the first basement level when construction of the superstructure begins.  From that point on, subsequent excavation and basement floor slabs continue along with the superstructure.  The firm of Goldin & Stafford performed the excavation for the Marriott Marquis.  Like any major excavation project, workers were provided rebreathing kits.  Here all materials and personnel had to be lowered and raised through a shaft at each basement level, requiring much choreographing. That shaft reached down 7 levels!  Delicate timing existed throughout the project.  Because of engineering requirements, superstructure construction waited until several underground levels were completed. Basement floor slabs required steel plates in addition to rebar.  Materials arrived from around the globe: glass from South Africa, stone from Greece and Spain, hardwoods from Canada. The atrium couldn’t be enclosed until late November 2013, requiring an extensive tent system to permit and protect work to proceed. Up to 11 cranes were employed.   Up to 800 construction trucks needed daily site access and double work shifts were employed, requiring D.C. government approval. 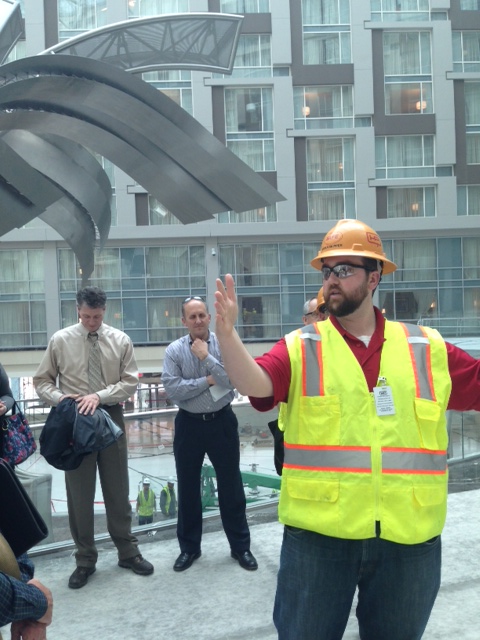 Adding to the challenges, none of the construction firms had first-hand experience with top-down construction.  During the WBC tour, much discussion focused on the advantages of top-down construction.  Our guides Brian Tipper and Brian Shipper were certain that top-down construction greatly facilitated construction under nearly impossible site constraints and that this method saved time.  As to whether the process saved money is yet to be determined.  Come May 28, WBC members will get to see first-hand and be one of the first users of this LEED Silver luxury hotel as the WBC will be holding its Regional Development Forum at the new Marriott Marquis Washington, DC.

Rob Klein
With over 30 years experience in project management, Klein Consulting facilitates redevelopment and entitlements through analysis and outreach. 240-848-4951